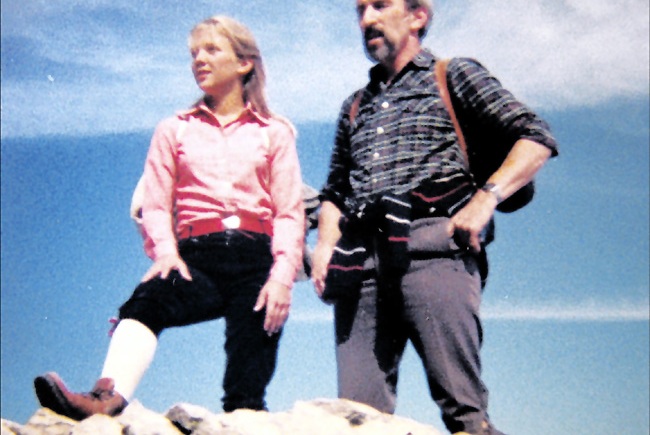 The definitive account of the only case of its kind in Northern Ireland, the ongoing campaign for justice and a labour-of-love in memory of the victim of a murder mystery still officially unsolved after 31 years

Chapter 42: The Girl With April In Her Eyes

Expecting to Fly: A rare photo of Inga-Maria Hauser and her father Josef taken in the early 1980’s

There once was a King, who called for the Spring
For his world was still covered in snow
But the Spring had not been, for he was wicked and mean
In his winter-fields nothing would grow
And when a traveller called seeking help at the door
Only food and a bed for the night
The girl with April in her eyes

She rode through the night till she came to the light
By the firelight she died
Oh the morning was bright, all the world was snow-white
But when he came to the place where she lay
His field was ablaze with flowers on the grave
Of the girl with April in her eyes

She is gone
The girl with April in her eyes

Chris de Burgh – ‘The Girl With April In Her Eyes’

Referencing a song by Chris de Burgh may seem more than a little incongruous for a blog that regularly features lyrical quotations from such doyens of musical credibility and rock royalty as Joy Division and The Smiths. But I quote the velvet-voiced Irish crooner with good reason on this night, April 20th, which is 30 years from the night when Inga-Maria’s battered body was discovered in the remote westernmost section of Ballypatrick Forest Park by the horrified sheep farmer who found her.

“Someone help the girl with April in her eyes” goes one of Chris de Burgh’s lesser-known songs. A song that, believe it or not, was one of Inga-Maria’s favourites, as revealed to me by one of her teenage friends in Munich. As anyone with knowledge of the facts of this case would know, Inga-Maria was murdered on the night of April 6th 1988, with her body not being discovered until April 20th. I have always found one of the saddest and most chilling facts of this case to be that this “Girl with April in her Eyes”, whose dream it was to travel through the UK and Ireland that April, had written a postcard in which she spoke of how she was “Going to Ireland tomorrow. I think I’m looking forward to that the best” only to be murdered within minutes or hours of the ferry docking in Larne that night.

Inga-Maria’s body lay unattended and uncared-for for fourteen days in the forest. It bears repeating that, contrary to the erroneous claim made in many media reports that have been published over the years, she was not buried in a “shallow grave” or covered up in any way. She was dumped, discarded with a breathtaking callousness as if she was nothing, and left to the elements, with her clothing deliberately disturbed and all of her belongings scattered throughout the trees nearby. It is facts like these that make John Dallat MLA and I feel all the more motivated to keep up the campaign to seek truth and justice on Inga’s behalf, especially as she does not have any family members in Ireland to fight for her. But as was made abundantly clear at our memorial ceremony at Ballypatrick Forest Park on April 6th 2018, the community of Co. Antrim have taken Inga to their hearts, and that community numbers some of the finest people I’ve had the pleasure to know. How bittersweet that this teenage traveller, who arrived in this country unknown and unnoticed by all but those involved in her murder, has posthumously gathered thousands more friends than she ever could have imagined.

The photo that I’ve chosen to illustrate this instalment is one of Inga-Maria and her father Josef rock-climbing together in the early 1980’s. It is a rare and very special photograph that, although it’s been published a couple of places before, has never been widely circulated. For quite some time I’ve intended using it in a blog post but I wanted to wait for the perfect moment. This to me, the night of the 30th anniversary of Inga’s remains being discovered, is that moment. The phrase ‘Every picture tells a story’ is I think very true, and this picture I believe tells so much. In the background there lies a beautiful clear blue sky, the sort of dreamy, balmy sky that when overhead you look up at and bask in the glory of life, aware that you’re fortunate to be alive and in a position to witness such a stunning sight on the ultimate canvas, nature’s very own easel.

She looks very happy in the photo, in the first flush of her impending adolescence. I can imagine from looking at this photo that she was delighted to be outdoors with her dad, at his side as they navigated the rocks together, spending time together as father and daughter in a way that’s only much later apparent just how precious that time was. And in this case that was far much more so, for obvious reasons in the light of what would transpire only a handful of years later in Northern Ireland. But looking at the photo now, it is heartbreaking to think that at the moment this photo was taken, as Josef Hauser and his beloved daughter paused on the rocks with such a beautiful clear blue sky above them, that all the hopes and dreams that he would have had for her, and that she would have had for herself, would never be able to be realised. Imagine being the girl in that photo, and imagine at that moment wondering just how your life was going to turn out…Which career paths would you pursue, where would you live, what countries would you visit, what art would you create, would you get married or perhaps have children? Except in Inga’s case, virtually none of those things would happen. Because within just months of becoming an adult she would get off a ferry and be murdered, and dumped in a forest, and for thirty years (and counting) those who are responsible are yet to spend so much as a minute in prison for it.

A further scan of the lyrics of ‘The Girl With April In Her Eyes’ reveals a striking number of eerie parallels with what ensued on the night Inga-Maria Hauser arrived in Northern Ireland: “He was wicked and mean…When a traveller called seeking help at the door…Through the winter’s night, the wild wind and the snow…Someone help the girl with April in her eyes…With flowers on the grave, of the girl with April in her eyes… She is gone, the girl with April in her eyes”. I found it extraordinary to learn, in the light of those lyrics and the circumstances of the fateful April night that echoes so many of the lines in the song, that this had been one of her favourite songs. Something regular readers of this blog will be aware of because I’ve referred to this a number of times over the past two years, most recently several times throughout Part 15, is something that became a feature of the PSNI’s 30th anniversary press release, namely a line Inga-Maria wrote in her diary on the last day of her life which was “Going to Glasgow now. Snowy mountains, wild landscape”. And of course those details too were unwittingly foreshadowed in the lyrics to ‘The Girl With April in Her Eyes’.

But on this day, April 20th, the second landmark anniversary in this case to occur this month, let us respond to that request issued in the song Inga-Maria used to play on the record player in the youth club she attended at St. Gabriel’s Church in Munich during the mid-1980’s, which poignantly was also the church where her requiem was later held on May 25th 1988 (further eerie coincidences are that Inga-Maria’s funeral occurred on both my birthday and the birthday of Clare McCotter who wrote the triptych of poems about Inga which I published in Part 15 and another strange but far sadder coincidence is that Inga’s remains were tragically discovered on her mother’s birthday). The line in the song that goes, “Someone help the girl with April in her eyes”. Let us redouble our efforts to help this girl with April in her eyes by showing those among the very small group of people in the community who are in the position to enable police to bring those responsible for Inga’s murder to justice that they can do so with complete support from the rural communities of Co. Antrim, so many of whom I know deeply want this to happen.

It’s time to help the girl with April in her eyes.

I mentioned in Part 15 that it was my intention to publish in Part 16 an account of my and John Dallat MLA’s recent meeting with PSNI Detective Chief Superintendent Raymond Murray at police headquarters in Belfast but on account of today being the 30th anniversary of Inga Maria’s remains being discovered, I decided to postpone that instalment for a future post and instead produced an instalment for Part 16 that is I think more fitting to coincide with such a sombre occasion.

All rights reserved. No part of this work may be reproduced in any form without the permission in writing from the copyright owner.

With heartfelt thanks to Walter.

‘The Girl With April In Her Eyes’ written by Chris de Burgh. Published by Big Secret Music Inc. ASCAP ©1979